What year in the movies, huh? From highly anticipated large-scale productions to lower budget films that surprised me, 2017 has development been another great year to be a movie enthusiast. Just like last year, ranking my top 10 movies of the year has been a tough task. I have been constantly changing the order, re-reading my own reviews, or even re-watching some of the films to make sure I am confident with the 10 that I select. Let me be clear, this is not a list of the most flawless movies of the year, but rather the movies that I had the most fun with and would recommend to just about anyone. Also, I saw a lot of movies this year but by no means did I see all of the best movies of the year either. In addition to ranking my top 10 movies of the year, I will also be handing out a few awards (hypothetically of course) to movies that needed a little extra recognition for a particular reason. So with that being said, let’s kick it off with the honorable mentions.

*Disclaimer: You may notice that La La Land is not on my list for either last year or this year. That is not because it wasn’t a fantastic movie, it is merely because it came out in 2016 but I didn’t get a chance to watch it until 2017.

Hidden Figures: This movie was a really powerful film about the first female engineers in NASA during the space race. It was filled with some great performances by the lead actresses and a heartwarming conclusion.

Split: My favorite suspense thriller of the year (yes, over It). M. Night Shyamalan does an excellent job of putting the audience into the room with the characters and James McAvoy gives a performance worthy of an Oscar nomination.

Baby Driver: This film came out of nowhere for me and I really liked it. Though it isn’t free of plot holes, it is a fun enough film that you can look past them and just enjoy yourself. It also has a great soundtrack!

Dunkirk: To be honest, in the months leading up to this film I expected that it would end up high on my list come this time of year. While it did somewhat underwhelm me, it still deserves a nod as an honorable mention and the best war film of the year.

Jumanji: This movie pleasantly surprised me on a variety of levels. It was hilarious, action-packed, and really a lot of fun to watch! (Review Coming Soon)

10. Murder on the Orient Express

To start of my Top 10 movies of 2017 I have a movie that isn’t even certified fresh on Rotten Tomatoes. However, Murder on the Orient Express was really a fun watch for me and I think it did a great job of making the audience feel like the detective. It also just looks really authentic from the set design in the train to the costumes of all of the characters. If you are someone who typically enjoys a good ‘ole “Who dunnit?”, then this should be on your must-watch list for sure. 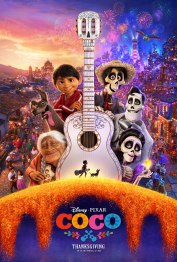 You know that there were a lot of good films this year when I have to put Coco at number 9. Pixar’s most recent masterpiece was not only beautifully animated and filled with color, it was also one of the most emotional films that I watched all year. This soundtrack for this film is also full of upbeat, mariachi style songs from many of the main characters. That is something that is somewhat new to Pixar movies and it definitely adds to the fun style of Coco.

8. Beauty and the Beast

This was one of my most highly anticipated movies of the year just because of the name and the cast. It was a movie that was set up for success in my eyes from the get-go. Disney took one of my favorite animated classics and cast one of my favorite actresses to play my all-time favorite Disney princess. The result was a magical movie that gave long-time Disney fans, such as myself, a chance to relive a classic tale. The cast list was fantastic and the music was extremely enjoyable. Beauty and the Beast are easily one of the best choices for a family movie night that you are going to find.

If you didn’t know by now, Tom Holland is Spider-man. By that I mean, he has really taken on the role and is doing the best to erase any memory of Andrew Garfield or Tobey Maguire in a spidey suit that may be lingering in our minds. Spider-Man Homecoming gave us a very enjoyable introduction to how our favorite web-slinger will be integrated into the MCU. I really liked how it emphasized the complicated life of a super-hero that is still dealing with the struggles that come along with being in highschool. 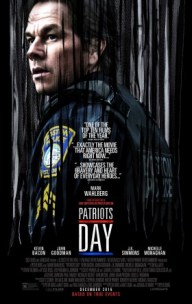 Patriots Day is listed as a 2016 movie because of it’s very limited release in late December of last year, but it didn’t really come out until mid-January of this year. I knew right after watching it that I would have to give it a spot on my list because of the unique way Director Peter Berg tells the true story of the Boston Bombing. This is the first time I have ever seen authentic security footage of the actual event integrated so seamlessly into the movie. It works on every level and I really learned a lot of the event in the process of enjoying a fantastic movie.

Thank goodness for Wonder Woman, am I right? This movie really kind of saved the DCEU from having a catastrophic couple of years that would’ve surely ended with some major changes. Gal Gadot is probably one of the most universally loved actress in cinema right now and it would be to DC’s benefit to use her as much as possible in their movies going forward. Chris Pine was also fantastic in this movie and the chemistry that he and Gadot displayed was one of the things that made this film work so well. 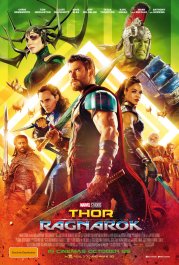 After Thor’s first to film’s were some of the least popular films in Marvel’s history, the franchise was due for a makeover for Thor: Ragnarok. Director Taika Waititi brought just the character and personality to the film that it needed and the result is one of the most fun watches of the entire year. This movie is a lot more like to Guardians of the Galaxy than it is the other two Thor movies. It has a much more bright and comedic style and really proves to be great for all ages. Sure, some of the comedy doesn’t exactly land on its feet, the film is definitely a good time and I will look forward to getting this one on Blu-ray. 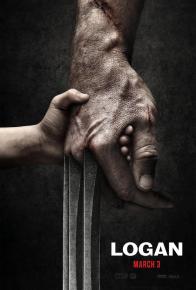 These top 3 were so close together for me that it got very difficult to arrange them. I even contemplated rating them all as tied for #1. Logan represents not only the end of one of the best actor-superhero runs in movie history but also the end of Fox’s X-Men as we know it. I really loved this movie for the way it doesn’t just show you the emotional and the pain that Logan is dealing with throughout, you actually feel it. Hugh Jackman is the best I have ever seen him in a movie (and that is saying a lot!). This is the kind of ending to an era that Hugh Jackman/Logan/The Wolverine deserves and it really makes me nervous when I hear that Disney wants to reboot the franchise because it will be near impossible to top this film.

Wind River is another movie that wasn’t very heavily advertised. It came and left the theaters without that many people hearing about it. The problem is, the movie is fantastic and deserves so much more attention than it received. It is a murder mystery that takes place on an Indian reserve in Wyoming. Not only is it cinematically gorgeous, but it deals with some very real things that can be very difficult to digest at times. Jeremy Renner gave an incredible performance and is still my pick for best actor when the Oscar’s come around in February.

I have been going back and forth for the last week or so as to whether I wanted to put Star Wars: The Last Jedi as my favorite movie of the year. It ended up landing in my top spot because I couldn’t think of any other movie that I enjoyed watching more than this one all year. I realize it had a bunch of problems. I also am well aware that a lot of people really don’t like it at all. For me, I decided that I can’t undervalue the excitement and shock value that I experienced while watching this film on opening night I and have already watched it again since. It is a visually stunning film and has some truly awesome action sequences that we haven’t seen before in the franchise. Putting Star Wars: The Last Jedi as my favorite movie of the year may be considered an unpopular or even “basic” opinion, but I’m not trying to impress anyone with sophisticated movies on my list. It’s based on pure enjoyment factor and this film was just that!

The Disaster Artist, Blade Runner 2049, Get Out, Darkest Hour, War for the Planet of the Apes, Three Billboards Outside Ebbing Missouri

King Arthur: Legend of the Sword

Pirates of the Caribbean: Dead Man Tell No Tales

Murder on the Orient Express

The Movie I am Least Likely to Watch Again:

The Movie I am Thankful that I Didn’t Watch:

That’s a wrap for 2017! It has been an exciting year in the movies and I had a great time watching and reviewing so many great (and some not so great) films this year! I want to give a special thank you to everyone who has read any of my reviews this year or provided me feedback in any way. Not only is this the end of my second year writing movie reviews, this is also my 50th ever post on this blog! Seeing that people really do read and care about some of my reviews really goes a long way. I look forward to another big year!

What was your favorite movie of the year? Are there any movies that I might not have gotten a chance to see that you particularly loved? Let me know!

Movie reviews, book reviews, and as the title says, often going off topic

Home of News, Reviews, Forgotten/Minor Characters Project, Who Wants to Be a Millionaire-Animation Edition games, and much more!!!

MovieRob
What About Movies?

conversations about film and television

The ramblings of a self confessed cinema addict.

Jordan and Eddie (The Movie Guys)

Today I Watched a Movie

The Casual Way to Discuss Movies